As several privacy-related organizations have made clear, this law proposes non-specific (bulk) interception powers for any form of telecom or data transfer without independent ex-ante review or court involvement (see the summary by Matthijs Koot, and reactions on the bill by Bits of Freedom, Privacy International, the Institute for Information Law of the University of Amsterdam IVIR, and the Internet Society ISOC). 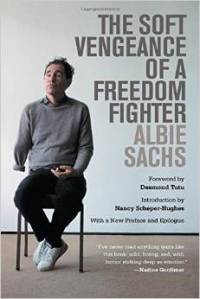 When discussing the importance of privacy, I am always reminded of South Africa’s anti-apartheid activist Albie Sachs and his autobiography “The Soft Vengeance of a Freedom Fighter” (first published in 1990, and turned into a film in 2014).

As a law student at the University of Capetown, Albie Sachs started fighting apartheid at the age of 17, in 1952. He was imprisoned from 1963-1964 (solitary confinement) and again in 1966, after which he was exiled from his home country South Africa.

In 1988, living in Maputo, Mozambique, he lost his right arm and an eye when his car was bombed by the South African secret police.

From 1991 until 1993, after Nelson Mandela’s release in 1990, Albie Sachs played a pivotal role in the negotiations leading to the new South African constitution.

In 1994 Nelson Mandela appointed him as judge of the highest court of South Africa, the Constitutional Court. He worked for the Truth and Reconciliation Commission between 1995 and 1998.

Albie Sachs wrote his Soft Vengeance in 1989. Nelson Mandela was still in prison, and the struggle against Apartheid was not won yet. Albie Sachs had just lost his arm and eye, and his book was his attempt to cope with his injuries.

For his recovery he was flown into a London hospital. He noticed that he was remarkably optimistic, and he was wondering why. Here is his reason (p.58):

“Perhaps part of my pleasure at being in this hospital room is that I am fairly sure it is not bugged. Sometimes I used to imagine my phone in Maputo being listened in to by at least three different secret services […]”

“Possibly my continuing sense of post-bomb euphoria comes from the fact that at least for the time being I am out of the net of hidden sensors, my spirit free from spying for the first time in three decades.”

He explains what it means to be surveilled:

“Ever since I was seventeen I have been politically active, I have lived with the notion that there are others accompanying every move I make, listening to every word I say.”

“Did the secret police really follow every up and down of my marriage, pick up the terms of our divorce, record automatically the names of our children even before they were entered in the birth register?”

And this gives rise to his dream for the future:

“I too have a dream, that there will one day be a world without police files, and bugged rooms, and tapped telephones, and intercepted mail, and that I will actually live in it.”

Albie Sachs is not alone in his dream. According to article 12 of the United Nations Universal Declaration of Human Rights, we all have a right to privacy:

“No one shall be subjected to arbitrary interference with his privacy, family, home or correspondence, nor to attacks upon his honour and reputation. Everyone has the right to the protection of the law against such interference or attacks.”

To date, the Internet has given us amazing possibilities to communicate with our family and friends, to search, read, and share information on almost any topic we find interesting, and to shop for almost any item we think we need. As a software engineering educator and researcher, I am proud to have played a tiny part in making this happen.

Unfortunately, the Internet can also be used as a place for massive surveillance activities, at levels that, for example, the South African apartheid regime could only have dreamed of. As a software engineer, I am terrified by the technical opportunities the Internet provides to governments wishing to know everything about their citizens.

A government aimed at drafting a modern intelligence bill should recognize this immense power, and take responsibility to safeguard the necessary privacy protection.

The Dutch government has failed to do so. It has proposed a bill with insufficient independent oversight, a bill that oppressive regimes, such as the former South African regime, would be happy to embrace.

Luckily, the present bill is still a draft. I sincerely hope that the final version will offer adequate privacy protection, and bring the world closer to the dream of Albie Sachs.